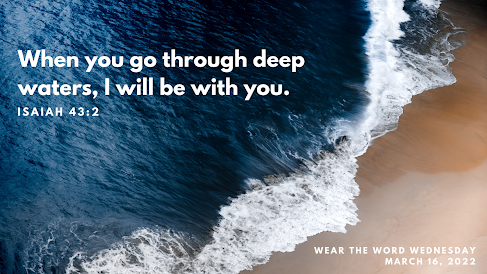 In celebration of our Wear the Word Wednesday verse, Isaiah 43:2, we would love for you to read more about this verse and participate in our devotional!

There is a great Isaiah 43 Spotify playlist to listen to as you read through this devotional, or just to worship! You can click this LINK to open the playlist.

First off, lets talk about what's going on in this verse:

In this verse, God is telling the Jewish people that He will be with them in their most troubling times, supporting them through them, giving them the strength to move beyond them and delivering them out of danger without harm.

The Jewish people were in captivity in Babylon. They faced many afflictions and were persecuted by men, represented by the waters, rivers, and fire. Some of the Jewish people had rejected God and provoked His wrath. For these people, the metaphor represents the temptations of Satan that rapidly came over them and overwhelmed them into a disastrous state of separation from God.

In spite of their disobedience to Him, God tells His people that they should not fear because He has redeemed them. God will continue his love and care for them. His people are God’s workmanship, created by him unto good works (Esp. 2:10), and He will not forsake the work of His hands.

Okay, now lets break down what the different parts of this verse are saying:

God opened the Red Sea for miles to allow the Israelites to walk on dry land through the sea (Exodus 14:21-22). Then God let the walls of the sea close and destroy Israel’s enemies. He did this to encourage the unbelieving Israelites to trust in Him in their difficulties and show them that those who hurt God’s people will be ruined.

#2 “…and when you pass through the rivers, they will not sweep over you.”

God suddenly dried up the Jordan river as a band of priests carrying the ark of the covenant stood at the river’s edge (Joshua 3:14-17). It was during the time of harvest in springtime when the Jordan would typically overflow all its banks from melting snow coming in from Lebanon. The ark represented the presence of God. God piled up the water to reveal a dry riverbed so that His people could walk into Canaan and end their long, tiring wanderings in the wilderness. The journey from the wilderness into Canaan represents the believer’s passage from a sinful world, through death and into heaven.

#3 “When you walk through the fire, you will not be burned; the flames will not set you ablaze.”

God protected Shadrach, Meshach, and Abednego. Nebuchadnezzar had his soldiers throw them into a furnace after they refused to worship any god but the Father. The furnace was so hot that the soldiers who threw them into the furnace were killed from the flames of the fire. Yet Shadrach, Meshach, and Abednego emerged from the furnace completely unsinged (Daniel 3), and because of this miracle were promoted in the province of Babylon.

Take 5 minutes as you listen to the Spotify playlist above and journal about troubling times that God has been with you through. It's much easier for us to look at these events in the past and see where God was with us, rather than in the moment. Reflect on these and think about how God is with you NOW.

Popular posts from this blog

“Perhaps this is the moment for which you have been created.” - Esther 4:14

By Unknown - July 18, 2015
The story of Esther is a famous one that has been recounted everywhere from Sunday school classes to the Hollywood big screen over and over again.  The sort-of Reader’s Digest version is that an orphan girl from no means finds favor with the King and ultimately saves her people from mass genocide.  But there is more to Esther’s than just that, right?  I mean there are only two books of the bible that are named after women:  Ruth and Esther.  So we have to ask ourselves what it must be that makes these women so worthy.   Ruth’s story can be summed up in a sentence  as well:  A woman’s husband dies, she follows her elderly mother in law to a foreign land where she finds favor with a wealthy land owner and ultimately becomes something like the 28-times great grandmother of Jesus.  The obvious commonalities in these two women’s stories are that they are both displaced from their homes, they both find favor with wealthy, powerful men- but risk their lives in doing so. These women stood i
Read more I recently saw this quote, "No one can go back and start a new beginning, but anyone can start today and make a new ending" (Unknown). I really began to think about that statement. The conclusion was that we don't start over; but we begin again right where we are, making things better in our lives. As a believer in Christ, it is not about saying I will do this and I won't do that and then dropping the idea or falling short. It is more about asking the Lord to help us each day, to fall deeper and deeper in love with Him. This way our focus will be set on the things of heaven and not on all this earthly stuff. If I were to make a New Year resolution, it would be to have a deeper commitment, a deeper love, and a deeper worship for the Lord. In the beginning of this past year, He spoke to me in that still small voice in prayer and said, "I am more than enough. I am more than enough in every area of your life." He also said to tell others the same thing.
Read more

You Can't Pour From an Empty Cup

Consider your life.  Consider your state of mind.   Consider your sisterhood and your position as a leader.   There is excitement going into a new year, absolutely.  A fresh start. An opportunity to either build on the excitement from the previous year, or maybe it’s an opportunity to wipe the slate clean and build something brand new after a tumultuous year.    Either way, whether your chapter is coming from a positive or negative place, one thing is certain:  you as a leader will face trials during this next academic year. (Wait, Magen, this is supposed to be a positive, encouraging word to start our group training… WHY are you being so pessimistic?!)   Let’s not call it pessimism, let’s call it realism. The reality is, and trust me, I’ve been doing this long enough to know, when you get a group of women together there will be conflict. It’s “when,” not “if.”  End scene, on to Act 2.    So, knowing that you will face obstacles this year, what can you do to equi
Read more